I knew Roger as a quiet and friendly activist at peace demonstrations and events and as a long-time member of the NVRN Network. He was involved since the 60s in CND and an active member of the Trident Ploughshares and the Peace Tax Campaign (now Conscience), and over the years was often arrested and jailed for his anti-nuclear activism, once being declared bankrupt for repeatedly refusing to pay the part of his tax allocated to the MOD.

In 2005 Roger declared his home and 17 acres of grounds a republic, declaring he did not recognise British government authority over him and he would not pay taxes.

He said he had formed “The Republic of Tickmorend” in response to “the madness of governments”. He said at the time, “I never asked to be a citizen of the British state. I am refusing to be one now…I feel so much better since I left the United Kingdom. I cannot say I feel any safer – far from it – but at least I have a clear conscience.

“I’m no longer implicated in aggressive wars, aggressive economics and nuclear insanity. None of this is my responsibility now that I live in the independent republic of Tickmorend, which remains a Nuclear-free Zone.

“The state is a protection racket, which doesn’t protect you. It endangers you even more.”

He urged other people to declare their independence and “extricate themselves from the responsibility for wicked acts of the UK Government in its wars of aggression and criminally insane nuclear policies…I’m not very fond of the British state which sent me to risk my life in Malaya as a conscript in 1947. It was just colonialism.”

In 2012, aged 84, he appeared in court alongside John Marjoram, then mayor of Stroud, after refusing to fill in the census forms due to its links to US defence company Lockheed Martin which won the government contract to collect the data. He was fined £360.

After his parents divorced, his mother married to the Russian sculptor and painter Naum Gabo. After Stowe school and national service in Malaysia, Roger studied physics at Cambridge and then at Massachusetts Institute of Technology. There he married Beverly Allan, an African American, with whom he had four children, Beverly, Kim, Michele, Natasha and Leda. Beverly introduced him to a group of peace campaigners and went with him on civil rights demonstrations. He also took part in demonstrations against nuclear testing. He worked in the US as a teacher and after moving back to the UK as a journalist chiefly with Resurgence and Peace News.

After his marriage ended in 1972, Roger moved to a smallholding at Tickmorend, Gloucestershire, to live off the land. He stayed there for the rest of his life, keeping a cow and hens and growing his own food on a productive organic garden, while also tending acres of beautiful flower meadows that supported an array of wildlife.

An avid reader and listener to classical music, Roger was also a prolific potter whose beautiful plates, mugs and bowls were gifted to friends and family. He loved growing apples, asparagus and artichokes, delighted in eating cheesecake and gingerbread, and made jam, marmalade and sloe gin.

In his 80s he was still skiing down the Gloucestershire hills when it snowed. After his death, his children asked if “peace campaigner” could be put on his death certificate under “occupation” – and the registrar obliged.

Roger is survived by four of his children, Beverly, Kim, Michele and Natasha, and seven grandchildren.

Please click on the image below to enlarge it. 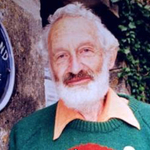