On the 26th June we’re organising an anti-war bloc, again alongside CND, for the People’s Assembly National Demonstration. It’s vital that the anti-war message is front and centre of what is set to be one of the largest mobilisations of the past few years.

As the pandemic has raged, Boris Johnson has vastly increased the military budget while denying NHS staff the significant pay rise they deserve. It’s a disgrace.

As Lowkey said at our Threats of War Conference last weekend ‘we have far more important and socially useful things to spend money on than more toys for us to audition as the U.S.’s junior partner in more of its war games’. It’s time we took that message to the streets. 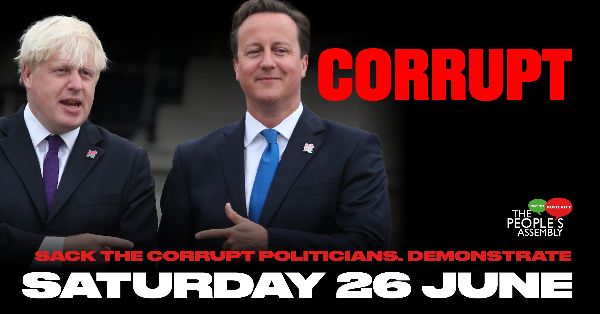 Over the past month it’s been made crystal clear that Boris Johnson’s government wholeheartedly supports apartheid Israel and its brutal repressesion of the Palestinian people.

Just days after Israel’s latest massacre in Gaza had come to an end Dominic Raab hopped on a plane to declare to then Prime Minister Benjamin Netanyahu that ‘you can always count on us’. Visiting the perpetrator of a massacre and making such a statement is utterly deplorable.

But countering that support for Israel’s violence has been the overwhelming voice of people in the streets who have amassed in their hundreds of thousands across the UK in recent weeks.

The next step in building this movement is to join the Palestine, Peace & Anti-War Bloc on the People’s Assembly National Demonstration on Sat June 26th. Be part of this vital protest as we demand freedom for Palestine, welfare not warfare and nurses not nukes. 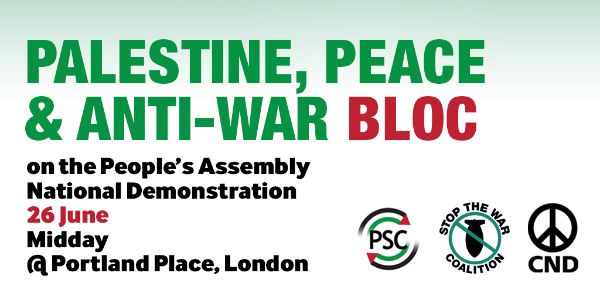 We must not forget that in the face of the greatest crisis since WW2 Boris Johnson chose to prioritise military spending over the biggest threat to safety and security for people in Britain – COVID-19.

Just prior to the onset of the huge 2nd wave of the virus, which resulted in the deaths of over 50,000 people, Johnson pledged an unprecedented £16.5bn surge in defence spending.

This needless extra money will be spent increasing Britain’s offensive capacity, not protecting the population. We believe the effort to save people’s lives and care for people in a crisis should have priority over new technologies of mass killing.

If you agree make sure you’re on the streets the Saturday after next to demonstrate that we will not put up with these warped priorities any longer!

I’ll be there on the 26th June

Much of this cash plucked off the magic money tree for war is being designated towards increasing Britain’s nuclear arsenal. Not only is this completely unnecessary, it is also illegal as it breaches the Nuclear Non-Proliferation Treaty.

Johnson has gone out of his way to take up the UK’s place as the primary lapdog of the US since he became PM. As Biden’s confrontational attitude towards Russia and China ramps up this increase in nuclear warheads is an extremely worrying development.

We need a change of course that prioritises the health and well-being of people in Britain and across the globe, not threatens them with unspeakable violence. Make sure you’re there on the 26th to make that point loud and clear.